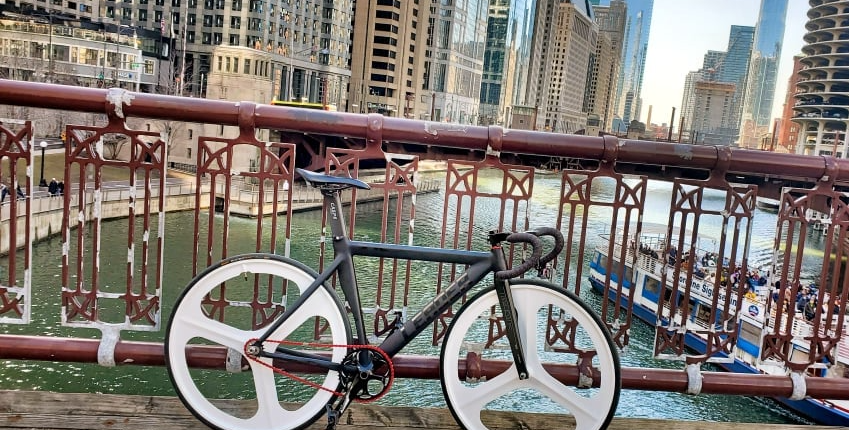 1. How did you get into alley cats?

I first started through word of mouth from other bike messengers as alleycats are designed too replicate an average day of a bike messenger work checking in at point A, rushing to point B, checking in and on to the next all fast as possible.

2. Tell us about the history of alley cats.

It is a type of race that bike messengers partake in for fun that simulates the average messenger’s work day.
Most often, alley cat races are designed as a “checkpoint” race, meaning that racers must pass through certain points on the pre-defined route in succession before completing the race. Some check points require actually dropping off/picking up items or even completely silly games (like spinning around in circles and pinning a tail on a donkey) before receiving clearance to proceed to the next checkpoint.
Some races mimic “sprints” or “time trials” like those commonly found in professional bicycle races.
Cheating, taking alternative routes, or otherwise “breaking the rules” are generally acceptable as that bike messenger culture can be highly competitive and require messengers to “do what it takes” to get the job done.
Awards are generally bragging rights in the forms of spoke cards. Before spoke cards were fashionable, these cards tended to be regular playing cards from a deck. The winner (first place) usually receives an Ace of Spades and can proudly wear it in the rear wheel. Instead of wearing numbers on their shirts or bags, spoke cards can be used to identify competitors at the finish line and check points.
The first race to be called an ‘alley cat’ was held in Toronto on 30 October 1989 and continued, in its original form, around Halloween and Valentine’s Day for the following five years. … Many smaller cities with no cycle messenger population are also home to alleycats run by the burgeoning urban cyclist subculture.

An alleycat is a non sanctioned race between bike messengers essentially to see who is faster and more productive, meaning choosing the fastest routes through our city on the fly and bragging rights. It’s mostly an underground event. It is an entire world of cycling that not many people know about or are too familiar with.

5. Can anyone join? If not, how do you become a part of this group?

Basically its an invite only event, but not hard too get invited really…..I was just dropping off a package one day and this random other bike messenger handed me a piece of paper with a meet-up spot and date and i went from there lol.
Although it has become more mainstream and there are websites you can just search alleycat races …..By the way, there is a really famous one in Mexico City, an absolute blast of a good time.

6. How often are there meet-ups, rides, and races?

They vary, you never know when one may pop up just be alert and stay tuned in with the messenger community

7. How do you find an alley cat group in your local community?

8. What is your favorite memory from an event?

Its honestly hard too choose, the camaraderie us messengers share is unparalleled. Win or lose we are all listening too polka and tossing back a brewski at the end of the day its a brotherhood and sisterhood unlike any other.

9. What would you tell someone just getting into this?

Ride hard, don’t stop, don’t be scared and have fun thats what its all about.

10. Anything else we should know?

I would encourage everyone to do there own research and see what you all think, this is all just from my perspective.
Alleycat Race Mexico City:
https://youtube.com/watch?v=DkTBGyVojOA&feature=share